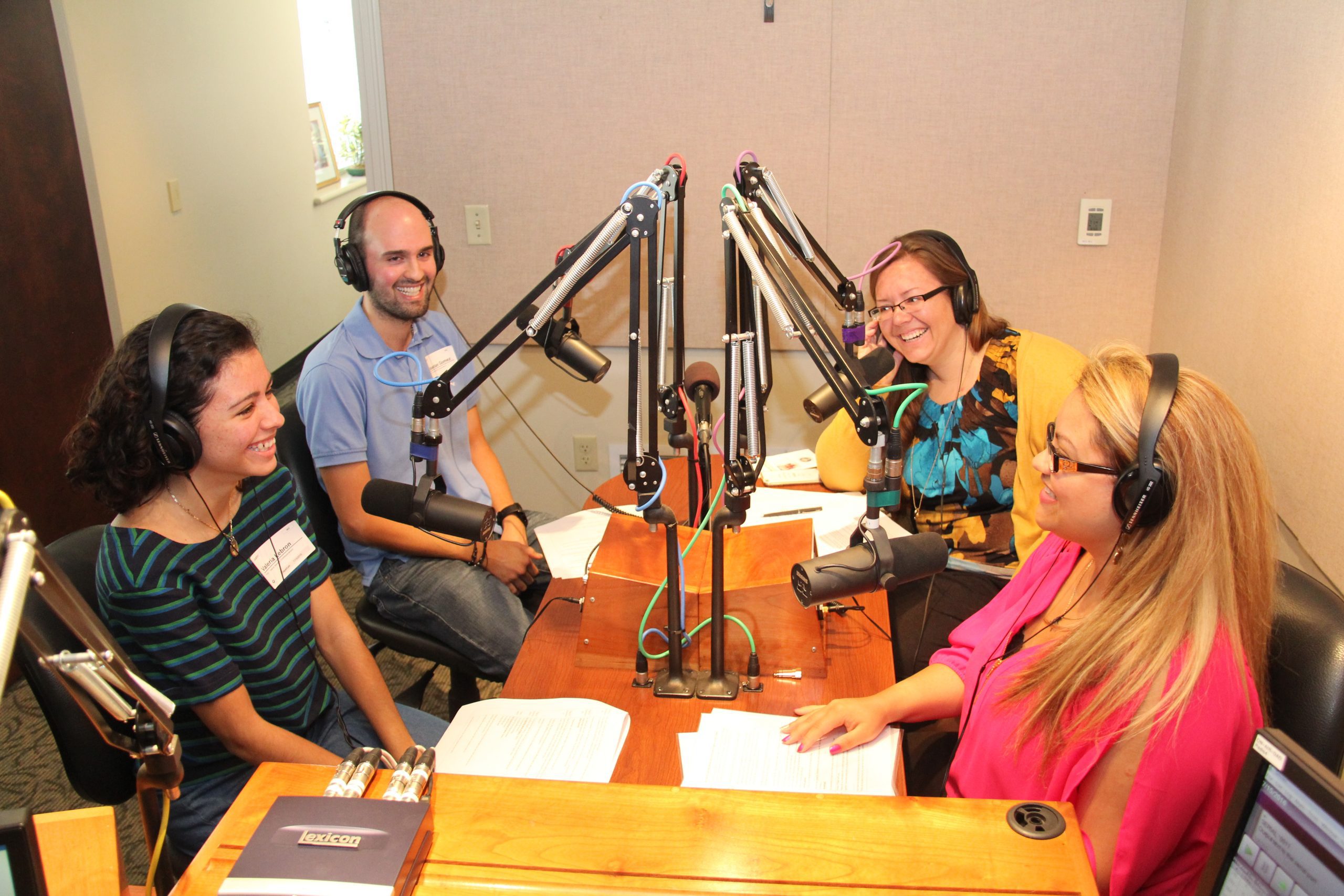 This week, a delegation of 45 pilgrims from the Diocese of Orlando will be joining over 2 million young adults in Krakow, Poland for the 32nd World Youth Day (WYD). WYD is a worldwide encounter with the Pope which is typically celebrated every three years in a different country. This WYD was called especially because of the Year of Mercy. The international gathering is a weeklong spiritual journey where pilgrims from all over the world unite to share their faith. The week includes prayer, song, concerts, liturgy, catechesis, and an unforgettable vigil and closing Mass with the Holy Father.

In 1986 Pope John Paul II invited young people from all over the world to participate in a pilgrimage at the very first World Youth Day. Since then, it has been held in Argentina, Spain, the United States, Philippines, France, Italy, Canada, Germany, and Australia.

Sebastian Gomez and Valeria Lebron from St. Isaac Jogues Parish in Orlando spoke with Faith Fit Radio Streaming Communications Manager, Katherine Laguna, about their journey. Also joining them was Kimmy Zeiler, Director of Youth Ministry in the Office of Laity, Family and Life at the Diocese of Orlando, who is leading the pilgrimage to Poland, July 21st-August 2nd.

Katherine: Please tell us a little about this incredible pilgrimage you are leading.

Kimmy: We have a group of 45 pilgrims representing four different parish groups. We have St. Isaac Jogues’ Father Jose Muñoz and Father Andrzej (Jurkiewicz, St. Joseph Parish, Orlando) will be joining that group; from the Basilica of St. Paul (Daytona beach) – Father Tim (Daly) and Deacon Edwin (Cardona); St. Lawrence Parish (Bushnell) – Father V (Waldemar) will be coming from there. He is also from Poland. And Blessed Trinity will also be joining us with a group.

Katherine: Can you tell us about some of the places you’re going to be visiting?

Katherine: Such a blessing to be where St. John Paul II was. It’s incredible. I’m jealous already!

Kimmy: Yeah. Then the WYD activities start. On Tuesday, July 26th we get to go to the Divine Mercy Shrine. We’ll have time at the Divine Mercy image where St. Faustina was and received the beautiful Divine Mercy message. During the WYD activities, there’ll be keynote presentations, different catechesis by bishops and other Catholic celebrities, if you will. Our very own Sister Bethany Madonna from Orlando is one of our major keynotes on one of the days. But the School of Mercy is going to be a unique opportunity where we’re going to be learning skills on how to live lives of mercy during this Year of Mercy, because that is one of the themes. So we’re going to be hearing personal conversion stories, Theology of the Body, more information about our featured saints and about the persecution of Christians going on in the Middle East.

Katherine: That is perfect. As you were saying, this year’s theme for WYD is the Beatitudes, from Matt. 5:7, “Blessed are the merciful for they shall obtain mercy” and it’s also linked to this Extraordinary Jubilee of Mercy. Are there any other places you’ll visit in Poland that are related to this year’s theme of mercy?

Katherine: One of the main things is St. Pope JP II. He was 19 when Nazi Germany invaded Poland. So the Soviet liberation of Poland actually just brought communism and Pope JP II was in the midst of all this for 33 years, promoting Christianity and religious freedom under the threat of a regime attempting to squash any opposition to that atheistic, totalitarian rule. So just his example, perseverance, constancy and his merciful heart are our model for this WYD, which is why those areas are going to be so important for that Year of Mercy. And then we get to celebrate it in that final event, the Vigil Mass. So we’re out of the Vigil, sleeping under the stars. It’s going to be a long pilgrimage, an 8-mile walk out there and then Pope Francis will come and we’ll have a huge international Mass.

Sebastian: I think it’s just part of being the Body of Christ. It’s a great experience and a once in a lifetime thing.

Katherine: Part of your pilgrimage will touch on some of the locations where great suffering occurred such as Krakow’s Sanctuary of Divine Mercy and Auschwitz, a place during the years of Nazi rule. How do you think visiting places of such great suffering might be affected by World Youth Day?

Valeria: Well, we’re going to be in Auschwitz and we’re going to be praying the Divine Mercy Chaplet. I think it’s very beautiful because St. Faustina was given this prayer for the world. It’s such a blessing for me and for all these youth that are going to be there. We’ll be just exploding with mercy afterwards.

Katherine: That’s beautiful. Sebastian, how can this be part of the healing and forgiveness that is associated with mercy?

Sebastian: Well, I think that maybe that town, where these horrible things occurred in the past, still feel affected and guilty for what might have happened during World War II. But I feel that by us praying… It’s a way of consoling, which is one of the mercies. And just the whole message of forgiveness… that’s what the Church is about. It’s at the core of the Church and it’s the message we should be bringing to the world… I think it’s definitely a message that the world needs.

Katherine: Following through on the Year of Mercy, we are also provided with the Spiritual and Corporal Works of Mercy. These are all beautiful works of mercy that strengthen our own faith and love for our brother’s and sister’s in Christ. How do you use your faith as a symbol of mercy?

Sebastian: Well, first of all, I’m not perfect, but I would say, just trying to be a good Christian. I’m not trying to boast, but feeding the hungry. I saw this homeless guy one day, got him some food. I thought it would help him in some way. Another example is, some of the people from our group that are going to Poland actually went to the March for Life. It was a way to pray for the dead, the babies that have been aborted, but still fight for those who still have a chance.

Katherine: How has this Year of Mercy impacted your faith?

Valeria: This year has definitely gotten me closer to God. I had this transition of being a high school girl and going to college. When I heard about this trip, I was still a senior in high school … I felt a calling, a longing to be there. I started working, saving my little extra money for me to go to the trip. It was a lot of work, a lot of stressful times. I thought I wasn’t going to make it. Then this year, I had the privilege of getting a job at a nursing home as a certified nursing assistant. I feel like, this is the most beautiful job because it’s like a corporal work of mercy because I am actually serving for these people who don’t have anybody. Their families forget them and I am just here to serve them and be a comfort for them.

Katherine: That’s really beautiful and I think that it all wraps into a really beautiful cycle. You wanted to go and share the mercy and love with others in Poland and then, here you are, doing exactly what Jesus wanted you to do. It’s such a great bundle of that compassion and mercy. And I think it’s excellent.

Sebastian, how important is it for this generation’s youth to somehow capture the love of Jesus and work to build a relationship with Him?

Sebastian: People are lost and with our faith, our generation has to make the difference. We have to be God’s example or messenger for others because some people are lost and they don’t know about Jesus. And they need Jesus. Faith is a gift and we can’t just keep it because that would be selfish.

To share the WYD stateside activities, join Holy Family Catholic Church on July 30th, 2:00 p.m. – 8:00 p.m. Experience the polish culture with a polka dance lesson, a keynote from Father Benjamin Lenertz on mercy and what that means for us in our daily life. Mass with Pope Francis will be livestreamed. Following Mass will be a polish dinner and a candlelight procession to adoration.

Also, please follow us at #WYDorlando. Pilgrims will be posting throughout their journey.

“For I am not ashamed of the Gospel. It is the power of God for the salvation of everyone who believes.”
Romans 1:16